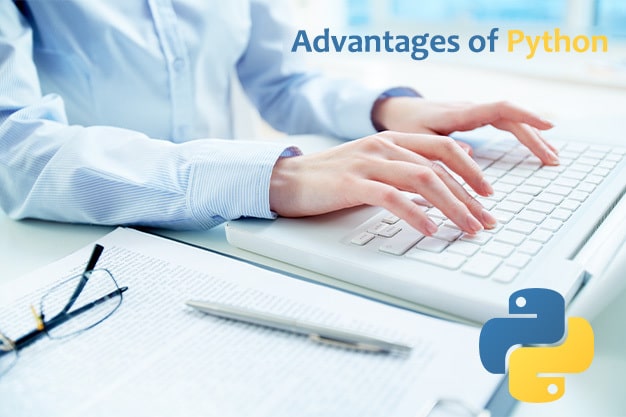 What is Python? What are the Advantages of Python?

Python language is adored by a large community of coders for many reasons. Many businesses and organizations are advised to choose Python as their language for programming.

We look at various applications of Python

The versatility of Python language application is the reason that gives this language the edge over others. Listed below are some of the key advantages of Python programming.

Python is an open-source language. Using Python language doesn’t require a particular subscription or custom-built platform which makes any laptop and desktop compatible with Python. All the necessary tools, modules, and libraries required for Python coding are free.

The essential IDEs include PTVS, Pydev with eclipse spyder python can be downloaded easily for free. It reduces costs which are always beneficial to businesses.

One of the key benefits of Python is it has a very simple syntax. The same logic that needs 6 lines in C++ language requires just 3 lines in Python. The advantage of having smaller codes is it requires less space, less time, and which makes the coders happy, as the correction or rework takes lesser time. The language aces the parameters of readability. And the presence of many built-ins and libraries only adds to the ease of programming. This in turn helps in cost reduction and yield more profits.

The Python Package Index (PyPI) contains numerous third-party modules that make Python capable of interacting with most other platforms and languages.

By default, Python provides a large standard library that is powered with internet protocols, web services tools, string operations, and operating system interfaces. Highly preferred programming tasks have already been scripted into the standard library which significantly reduces the length of the code.

Python is equipped with built-in list and dictionary data structures which are used to construct fast runtime data structures. Python also provides the option of dynamic high-level data typing which reduces the length of the code.

Python is powered with object-oriented design, which enhances process control. Strong integration, and text processing capabilities. It also has its testing framework. Therefore all this contributes to the increase in speed and productivity. A python is a viable option for building complex multi-protocol network applications.

All kinds of Business can afford it

Being a free platform, all small and medium-level companies can use it. Companies in the budding stage can use the Python platform and begin operations with cost-effectiveness. The ability to develop software and applications makes it preferable for start-ups and can leverage the speed of Python to excel in the industry.

One of the most trending languages

When Java and C++ are the native languages that have an object-oriented approach, Python requires shorter codes with very simple syntax and also offers all the features of Java and C++. Thus making it the most preferred language. It is easy to amend, rework and optimize.

As businesses depend on the software and its functionality as it depends on the way it is coded. Thus, Python is for everyone involved in software making. Every software product is a result of series of software architecture that is built, in series of coding and testing to give the desired output.

When a lot is working around the code, then the program must be understood with clarity by everyone from developer to tester and everyone in the middle. And this Python language suitable for everyone. Python has all the features that make it a true language that is appreciated and accepted all around the globe.